More details at We Should Practice.

Welcome to the after-match report from Banana Boat’s September fono in Grey Lynn.

No apologies were received.

Geraldine was welcomed back!

Aroha had a full on month of play watching and he shared his views to a very appreciative audience.

Louise‘s We Should Practice is holding workshops on applying for International Residencies, Wednesday 10 to Thursday 11 October 2012 – more details here.

Suli Moa‘s A Heart’s Path is on right now!

Louise gave the fono the “Five Items Exercise”.  It was challenging!  It was hilarious!  It was fun!

– will be on Thursday 25 October at the Toi Ora Live Art Studio, 6 Putiki Street, Grey Lynn.

Welcome to the after-match report from Banana Boat’s July fono in Grey Lynn, which was very kindly run by Leilani Unasa.

David apologised profusely to Arnette for not crediting her for running the previous month’s fono (the minutes have been very belatedly fixed).  Just this once, she stayed her hand, and David understood just how lucky he was.

Enter the Banana winner Suli Moa‘s A Heart’s Path will have its world premiere in October as part of the 2012 Matala Tongan Festival.  When we know more, you will know more.

Kila Kokonut Krew’s tenth anniversary remounting of The Taro King is due at the Mangere Arts Centre 16-21 August 2012.

Jenni, Louise and David reported on the reading of Goretti Chadwick’s Galulolo (Tsunami), which they attended earlier in the evening.  Auckland Theatre Company will be be mounting Galulolo 11-20 October 2012.

– will be on Thursday 23 August at the Toi Ora Live Art Studio, 6 Putiki Street, Grey Lynn. 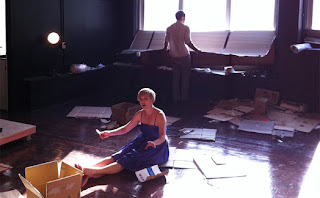 Welcome to the after-match report from Banana Boat’s April fono.

LEILANI proudly announced a Master Class with Kath Akuhata-Brown, to be held in June, made possible in partnership with the New Zealand Film Commission. Watch this space for more details.

Playmarket are taking the New Writers and Creative Clinics workshops on the road. Check out their website for more information.

Correction: the rumour of LOUISE’s Le Tauvaga being mounted in May is untrue. Banana Boat apologises to Louise for the random-seeming queries stemming from last month’s minutes.

Banana Boat clinics are going two for two at this year’s Matariki in June:
– Creative Clinics, 11-12 June, with an evening presentation on Sunday the 12th;
– Newbies Workshop, 12 June.

Again. Although it was called a fun activity in introduction, all meeting attendees saw right through that but humoured the creative spirit that is Banana Boat.

Taking a break this month. (And my apologies again to LEILANI for setting the April meeting a whole week earlier than the traditional “fourth Thursday of every month”.)

– will be on THURSDAY 26 19 MAY 2011 at the Mangere Arts Centre, Corner of Orly Avenue and Bader Drive, Mangere. Fono are currently alternating between Grey Lynn and Mangere.

Welcome to the after-match report.

The March Creative Clinics were judged a success – participants gained a lot from all three workshops provided, whether it was the one-on-one with Albert Belz, the workshop with James Wilson and some tame actors, or writing-for-newbies by DAVID.

A gentle reminder was given regarding the Producers Workshop in early April.

UPDATE: The workshop was fully booked and is half-way through as this is being typed.

Banana Boat is working to mount a Jukebox 2010 Season in late July with help from Creative New Zealand. Watch your email Inboxes.

Anyone who takes their writing seriously are urged to attend the Wellington Matariki Hui which will take place sometime in June – details to follow, probably from JENNI.

Banana Boat is taking its Creative Clinics to Manukau on 1-2 July 2010. Watch your email Inboxes.

— was courtesy of Playmarket: Jo Randerson‘s Banging Cymbal, Clanging Gong. MICHAEL was very game in reading all seven pages of this one-hander despite being the wrong gender.

— is THURSDAY 22 APRIL at the usual time and place.

Welcome to the after-match report.

Apologies were received from the reverend MUA PUA.

Good vibes were reported from various quarters about the Jukebox in December 2009. The evening was judged to be a success, and the group looks forward to making it a regular event on the theatre landscape.

By the time these minutes have been posted, the deadline for Banana Boat’s Inaugural Creative Clinics will have come and gone – but if you’re on the right email-lists, that would be old news; and if you’re not, 2011 is another year.

These clinics give playwrights and their scripts the opportunity to have:

— a half-day workshop with Massive Theatre’s JAMES WILSON; and/or

The clinics take place on MONDAY and TUESDAY, 8-9 MARCH, 10:00am to 4:30pm, at the COUNCIL CHAMBERS in the Auckland Town Hall. The clinics are open to the public for a look-behind-the-scenes kind of thing so don’t be shy.

The 2010 Banana Boat Creative Clinics are made possible with the support of AUCKLAND CITY CREATIVE COMMUNITIES and PLAYMARKET.

The Banana Boat is ALSO proud to announce the upcoming 2010 Producers Workshops that will take place over two SATURDAYS, 10 and 17 APRIL 2010, at The Edge.

A call for applications will go out soon (once the flurry over the Creative Clinics dies down a little) but fear not: there will be a deadline, there will be application criteria, there are limited places – the whole kit and caboodle that you love so much.

Banana Boat is responding to the call for a LIGHTING & SET DESIGN WORKSHOP and is working on it for – hopefully – later this year.

There is a WRITERS’ RETREAT in planning stages for the last quarter of 2010. This replaces the Pasifika Forum that usually happens around now (or soon).

– ERIC SMITH and CHETAN PATEL’s “I Don’t Do Coconut” will open the Banana Boat’s 2010 Reading Series in late March – watch this space (or email Eric).

… were not possible due to an uncooperative printer.

So David got up, set up a whiteboard and said, “I’ve got this idea for a story…” Sixty minutes went rather quickly as —

— David outlined the bones of his concept: he had three – no, four – no, three – characters and specific production constraints —

— characters were modified and pummelled —

— themes were tossed into the ring and kicked about —

— and the narrative structure was hassled and harried.

People seemed to enjoy it. David’s just happy the group did the heavy lifiting for him on his project.

SCRIPTS TO BE READ —

— at future meetings are welcome on a first-in, first-served and time-permitting basis. To avoid disappointment, getting in touch with David or Jenni at least a week beforehand will increase the chances of your script being read.

Only complete act/s for full-length plays, or complete one-act or short plays are read by the group. First-time attendees’ scripts will not be read. Scripts will need to be printed and copied at the writer’s expense.

If you have any questions, suggestions or requests, please don’t hesitate to email me, or call Jenni on 09 365 2648 (Mondays, Thursday-Fridays, business hours).